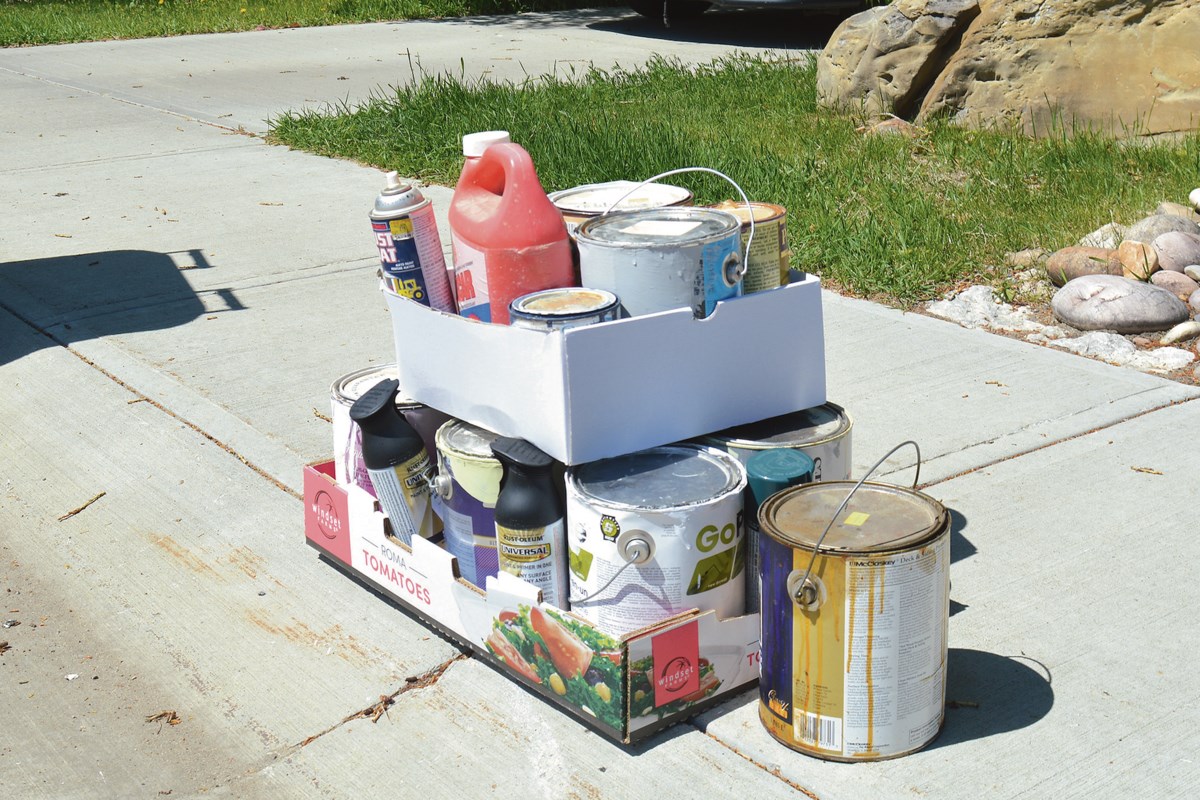 WESTLOCK — Residents of Westlock are largely responsible for the recent success of the Westlock Curbside Roundup on June 1-2, hosted by the municipality in partnership with the Alberta Recycling Management Authority.

And the numbers don’t lie with 3,100 liters of used oil, 910 cans of oil, 87 oil filters and a can of antifreeze, 1,345 spray cans and 3,320 gallons of paint, and four bins full of a cubic meter of household hazardous waste, which included 1,190 spray cans (WD 40 for example) and 49 propane canisters of various sizes collected.

“The only thing we found a bit unusual is that there is a large volume of waste oil. This tells us that Westlock has a number of people who like to change their own oil,” said Brad Schultz, COO of the Alberta Recycling Management Authority (ARMA). “Usually we find that in rural communities in Alberta.”

The volume and number of items collected were typical of roundup events they have held to date, Schultz noted. “The message we got from collecting this type of volume is that there are a lot of ‘do-it-yourselfers’ living in this community.”

The amounts raised in the curbside roundup were also noted at the June 27 Westlock Town Council meeting, where Councilor. Murtaza Jamaly, congratulated the administration for a job well done. “The data it contains is excellent. Wow, we picked up a lot,” Jamaly said.

“There has certainly been a lot of stuff that has been broadcast,” added Mayor Ralph Leriger.

Additionally, 115 tires and a variety of electronic devices, totaling around 300 items, were also collected during the two-day event.

Schultz said the pandemic played a role in exploring a “curbside” recycling option with ARMA, which spread the word to municipalities two years ago and hosted the first event. curbside collection in the town of Olds in 2020. This was followed by two more events in 2021 in the town of Devon and the First Nations community of Sikskia. They decided to continue the program, expanding it to five sites in 2022.

So far this year, three of Alberta’s planned curbside pickup events have already been completed, including those in Bruderheim, Wainwright and Westlock.

“It was really motivated because we saw the number drop at recycling centers, waste management facilities and transfer stations,” he said, noting that ARMA has more than 350 sites. collection points registered in agreement with the municipalities, throughout the province. These sites provide the public with a place to drop off electronics, paint, tires, used oil and household hazardous waste for recycling. “Two years ago when we held the Olds event, we were overwhelmed with the volume of material dropped off by residents curbside,” Schultz said. “Simply because of the volume generated and a better understanding of what people are sitting on in their garages, basements and yards, we thought we better start over.”

Schultz pointed out that people pay a recycling fee at the time of purchase for items such as tires, paint and electronics and the money goes to the Alberta Recycling Management Authority, which oversees recycling programs. recycling.

“We have developed an understanding of what people are sitting on in their homes and we have a job to do to educate Albertans, ensuring they know there is a local facility in their community to drop off this material. ,” Schultz explained. . “It was certainly an eye-opener and we learned a lot from organizing these events with the communities.”

Once items are dropped off by residents at local facilities, they are then picked up by electronics, paint, tire and oil recyclers, who are registered with AMRA.

“They are responsible for going to communities and loading all the material that residents have dropped off or that was generated in a (curbside) roundup, bringing it back to their facility and recycling it,” Schultz said. “All of this material is genuinely recycled. It is our job to manage the material with recyclers to ensure it is turned into another product and kept out of the waste stream.

2022-07-06
Previous Post: A GPS accuracy issue has affected Garmin, Suunto and Polar watches over the past week
Next Post: Irish tech disposal and recycling company opens site in Northborough