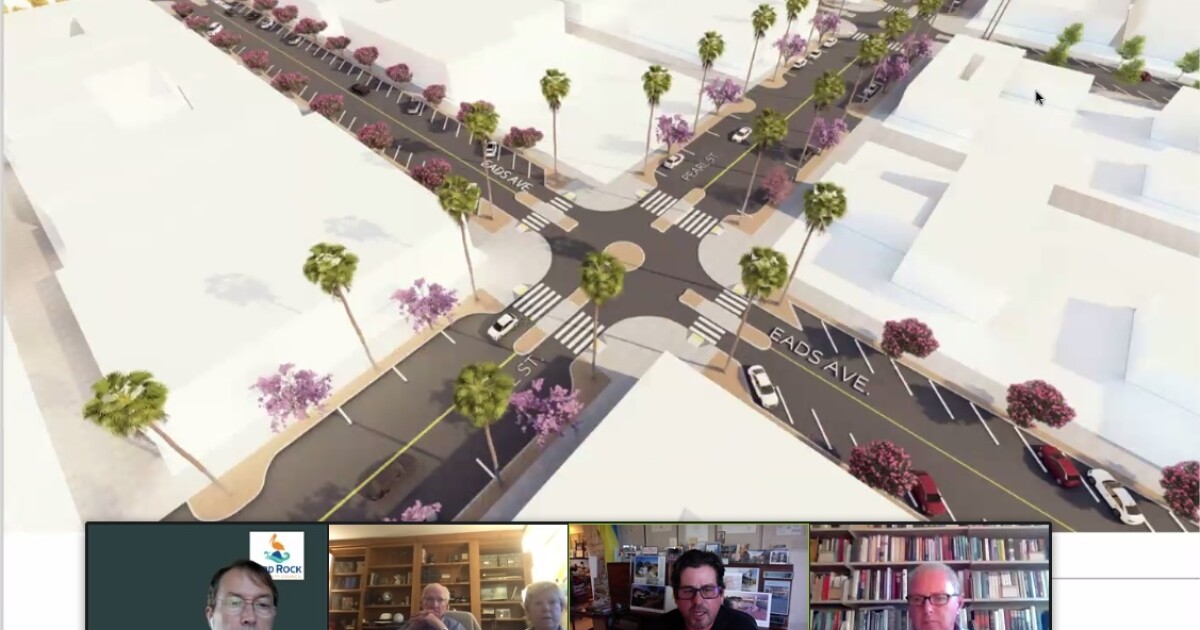 As the La Jolla Village Vision Committee Master Plan and the City of San Diego Organic Waste Recycling Plan continue to take shape, the Bird Rock Community Council heard updates on both during its June 7 meeting.

The presentations were for informational purposes only and the community council did not vote.

The village vision committee has been touring local planning groups over the past few months to gather feedback on its streetscape plan. The proposal aims to provide a comprehensive master plan for the public right-of-way, street trees, traffic calming and more in the village and surrounding area.

The Village Visioning Committee is an ad hoc group of realtors, architects, engineers, and others from the La Jolla Community Planning Association. The committee has been working on the plan for a year and a half.

Architect and La Jolla resident Trace Wilson, a committee member, presented the effort as a “macro view of La Jolla…from property line to property line, from Turquoise Street to UCSD and the ‘highway 5 to the coast’.

To create the plan, Wilson modeled all of La Jolla for a digital composition of its streets.

The tree portion of the plan, he said, aims to line up different streets with different trees so that each street’s appearance is “consistent yet special”. He said the committee is thinking about which trees might be suitable for each street. For example, taller, more pedestrian-oriented streets might have taller, more shade-oriented trees.

La Jolla Boulevard’s landscaping, including its canopy, is managed by the Bird Rock Maintenance Assessment District.

While the plan along La Jolla Boulevard in Bird Rock is inspired by roundabouts and traffic calming to reduce speed and increase safety, Prospect Street in The Village” is one of our streets main, so [part of the plan is] create a street tree pattern different from the rest… and look at a roundabout in front of the Museum [of Contemporary Art] to create a safer, quieter, more pedestrian friendly and more beautiful environment in the entire cultural district. »

He said Pearl Street in The Village was “desperately in need of sprucing up”, pedestrian-related improvements and traffic calming measures.

Community Planning Association President Diane Kane said some phases are being reviewed by city engineers and then the committee will pursue funding for safety-related upgrades.

“We try to think holistically across the whole community,” she said. “We’re looking at different modes of travel, making sidewalks more comfortable by widening them, making destinations for restaurants and other gathering spaces, and bringing our right of way into the 21st century.”

BRCC Chairman John Newsam called the effort “really exciting” and said he liked the “increase in canopy under the plan.”

Polina Osipova, the city’s recycling specialist, discussed the ongoing rollout of San Diego’s Organic Waste Recycling Program, which aims to keep organic waste such as food scraps out of area landfills, where they release methane during their decomposition. Methane is considered a potent short-term climate pollutant.

The program — driven by State Senate Bill 1383, in effect this year, affects all types of properties, including residences, businesses, administrations, schools, etc. As part of the program, an additional bin will be provided to collect food scraps, soiled paper, yard waste and wood waste that constitute organic waste. It will be collected by city workers and turned into composting material.

The start date for residential collections has not been announced. Currently, only “Tier 1” businesses, such as grocery stores of 10,000 square feet or more, are required to participate.

“The changes that come from SB 1383 are a pretty significant departure from the way we already do things, which is why the timeline for rolling out the program to homes served by the city is still being determined,” Osipova said.

The city is working on an implementation plan that will detail the new residential collection process, she said.

She agreed to come back for future meetings as the residential rollout gets closer. To learn more, visit sandiego.gov/organicwasterecycling.

Next meeting : The Bird Rock Community Council will then meet at 6 p.m. on Tuesday, July 5, likely online. Learn more about birdrockcc.org. ◆