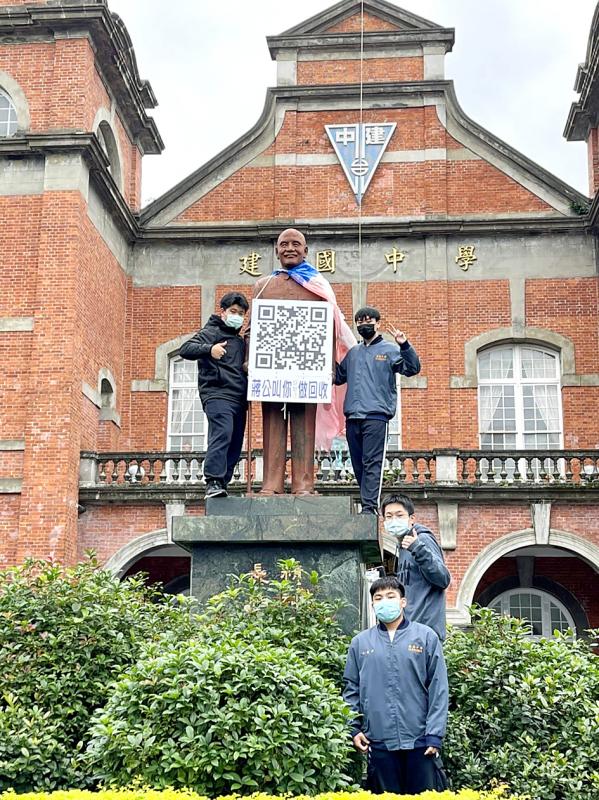 Students in Taipei have repurposed a campus statue of Chiang Kai-shek (蔣介石) to educate passers-by and other students about the environment by giving the towering bronze a cape made from recyclable materials and a giant QR code.

Attendees gathered for a lesson called “A Mandatory Lesson on Trash for Islanders,” where they brainstormed ideas to educate students and the public about the environment.

By consulting RE-THINK’s Red Dot Design Award-winning Marine Debris Guide and playing board games, the students approached the issue from a creative perspective.

They also took part in a beach cleanup to learn first-hand the idea that “trash knows no borders,” the group said.

The culmination of the six-week course was a series of interviews participants conducted with their teachers and peers about recycling habits and knowledge, which they used to analyze potential causes of poor practice. recycling and then to develop solutions, said RE-THINK.

After the design stages, the students created their own trash cans and a labeling system to reduce waste at Jianguo High, he said.

Students found that their system improved recycling practices at their school by 20%, the group added.

Thinking about how to further spread environmental awareness on campus, the students set their sights on the Chiang Bronze that stands at the entrance of Jianguo High.

Students from both schools collected recycled plastic bags to create a cape for the statue with the recycling logo in the center.

They also placed a sign around his neck with a QR code leading to a student-created recycling website.

The project has garnered an enthusiastic response on campus and online, with a post about the statue on the school’s Instagram meme page garnering more than 7,000 likes.

Teng Shu-hua (鄧書華), who teaches civics and social studies at Jianguo High, said a key aspect of high school is awareness and a physical presence is a way to start making an impact.

RE-THINK founder Jason Huang (黃之揚) said he hoped an in-depth program such as the one undertaken with schools could contribute to a diverse and lively environmental education by integrating fundamental aspects of the 108 curriculum, such as ethical practice, civil conscience and teamwork.

Comments will be moderated. Keep comments relevant to the article. Remarks containing abusive and obscene language, personal attacks of any kind or promotion will be removed and the user banned. The final decision will be at the discretion of The Taipei Times.