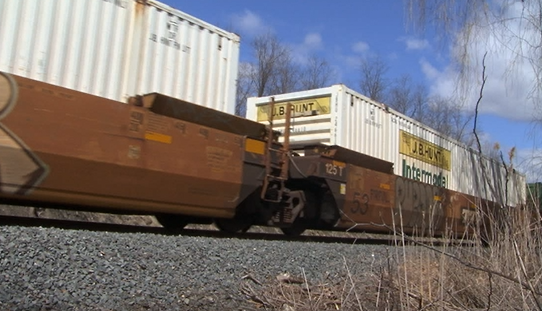 SARATOGA COUNTY, NY (NEWS10) – About a month after NEWS10 investigated complaints of loud and smelly trains sitting behind homes in Mechanicville and Stillwater, city officials have reached a settlement with the railroad companies to find a solution. Residents had complained for years about the idling of trains.

“It’s much nicer. You don’t see the tension among the neighbors, and apparently everyone is happy. I mean, I can talk to you now and you can hear me,” Mechanicville resident Joe Bramski told NEWS10 on Monday.

In late February, NEWS10 ABC visited Bramski’s home along the Pan Am train tracks, and it was difficult to have a conversation as trains stood idle behind his property. The sound at that time reached 95 decibels. In addition to noise, the trains often smelled of garbage or fumes, and sometimes left behind water pollution. Even that has gotten better for Bramski over the past month.

“[As a] actually the creek at the back of my house – I don’t see any oil there right now,” Bramski said.

Stillwater Town Supervisor Ed Kinowski said help from the Federal Railroad Administration, conference calls with railroad companies, attention to the problem from Congressman Paul Tonko, and news reports helped solve a years-long problem for owners along the tracks. He added that trains now mostly stop in an area empty of houses.

“Pan Am has improved its internal roads along the tracks to accommodate taxi pick-ups for crew changes,” Kinowski wrote in an email to other city employees that he shared with NEWS10.

On Monday, the trains could be seen stopped on the bridge over the Hudson before passing Bramski’s house. It only took about 10 minutes for the trains to pass, and they were busy behind his house.

Supervisor Kinowski noted that there may be times when trains stop further down the line along West Street due to the length of the train, but hopefully this will be an infrequent occurrence. Overall, he and Bramski are happy with the improvements.

“You know, you can’t stop the railroad, they have to do their job too,” Bramski said, “but people have to live too.”