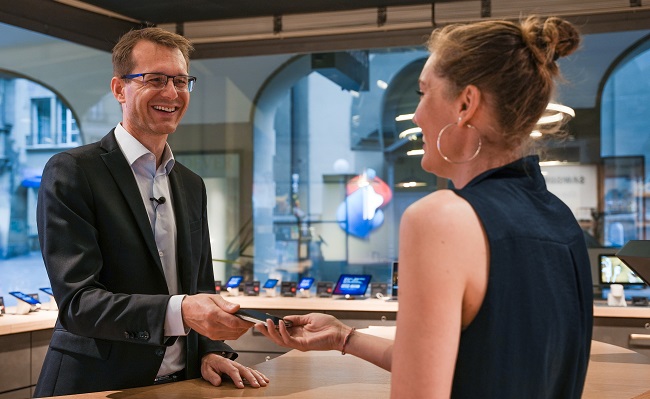 Operator Swisscom has reached the milestone of returning one million used smartphones for recycling and reuse since launching a handset donation program in 2012, with all proceeds going to charity.

The Swiss company’s Mobile Aid project is appealing to customers and those of competing operators to donate used handsets in its stores. Smartphones are then stripped of their data, those that can be reused being resold and the rest recycled.

Proceeds from sales and materials derived from recycled units are donated to a children’s charity.

When announcing this milestone, Swisscom CEO Christoph Aeschlimann (in the photo on the left, receiving the historic gift) thanked customers, adding, “The proceeds from one million donated cellphones have already paid for 5 million meals for children in need.”

The operator estimates that there are still eight million unused handsets in Switzerland, with a material value of more than 60 million francs ($63 million).

“Given the scarcity of natural resources, the material obtained from the recycling process is itself very valuable,” the company noted in a statement.

“The rare earth minerals needed to make new cell phones come from all over the world. Mobile Aid enabled Swisscom to tap into a resource in its own country which, through recycling, creates social jobs with low entry requirements.”

Device recycling and reuse has been a major driver for the mobile industry and regulators in recent years in an effort to curb the growing volume of e-waste and improve industry sustainability benchmarks.