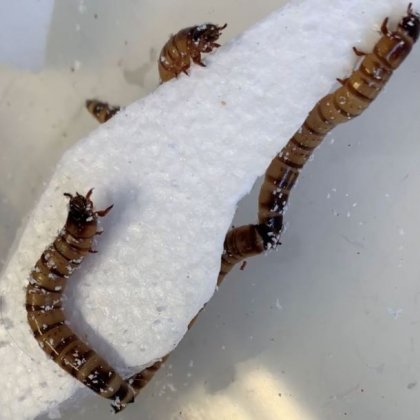 Researchers at the University of Queensland have found that a common species of worms with a taste for polystyrene can make a significant contribution to plastic recycling.

The team, led by Dr. Chris Rinke of UQ’s School of Chemistry and Molecular Biosciences, found that the Zophobas morio– known as the “superver” – likes to snack on polystyrene and can metabolize it thanks to a particular bacterial enzyme in his gut.

Supervers are the larvae of the Zophobas morio beetle, native to central and tropical regions of South America, and can reach 60 millimeters (2.5 inches) in length.

The worms were fed diets of polystyrene foam, wheat bran, or fasted for a period of three weeks.

“We found that superworms fed only polystyrene not only survived, but even gained marginal weight,” Rinke said.

“This suggests that worms can derive energy from polystyrene, most likely with the help of their gut microbes.”

The team discovered that the worms contained several encoded enzymes capable of degrading polystyrene and styrene, so their goal now is to engineer such enzymes to degrade plastic waste in recycling plants via mechanical loss and subsequent enzymatic biodegradation. .

Rinke said supervers are mini-recycling factories that shred polystyrene with their mouths and then feed it with their gut bacteria.

“The breakdown products of this reaction can then be used by other microbes to create valuable compounds such as bioplastics.”

Researchers hope this form of bio-upcycling will be used in plastic waste recycling to reduce landfilling worldwide.

The research’s co-author, PhD candidate Jiarui Sun, said the plan is to grow the gut bacteria in a lab and further test its ability to degrade polystyrene.

“We can then look at how we can expand this process to a level required for an entire recycling plant,” he said.

Rinke told The Epoch Times that at the scale of a recycling plant, the polystyrene would be shredded and then immersed in a cocktail of enzymes like a large bioreactor, but the ideal conditions for the enzymes to survive have yet to be determined.

“It’s one of the big bottlenecks. We have an idea of ​​what enzymes are, but they’re not very well characterized,” he said.

“It’s something we want to do over the next year to express these enzymes in our lab in larger quantities and characterize them in detail, so that we know exactly what the right temperature is, what the right pH is.

“So that’s a lot of research that needs to be done,” Rinke said.

Steve is a Sydney-based Australian journalist covering sport, arts and politics. He is an experienced English teacher, qualified nutritionist, sports enthusiast and amateur musician. Contact him at steve.milne@epochtimes.com.au.