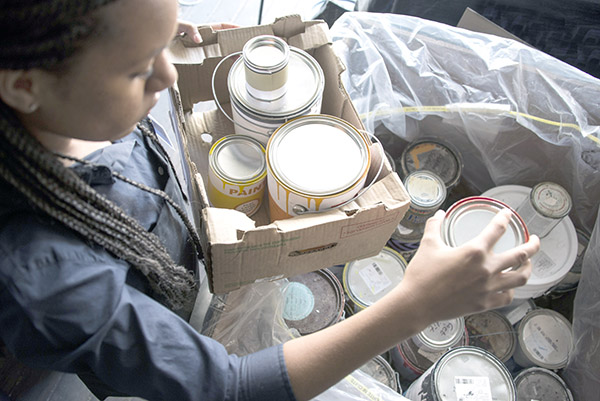 PaintCare says it has started anew paint recycling program in Syracuse and Central New York, allowing businesses, households and schools to recycle leftover paint, stain and varnish “in a convenient and sustainable way”.

PaintCare is a Washington, DC-based nonprofit organization created by the paint industry through the American Coatings Association (ACA) to manage leftover paint in states that have enacted paint protection laws. paint management, according to the group’s announcement on May 23.

Seven drop-off sites in the immediate Syracuse area have opened since May 1 with additional locations in Madison, Oswego and Cayuga counties. They include a high volume site – Miller Environmental Group at 532 State Fair Blvd. in Syracuse — which accepts 50 gallons or more, PaintCare said.

The nonprofit’s website includes a “Drop Site Locator” feature with information about each site’s address, hours, and requirements. All sites accept up to five gallons of paint from each customer, and some sites may accept more.

PaintCare encourages those planning to drop off paint to call ahead to ensure the site can accept the amount and type of paint they wish to recycle and to confirm the site’s hours of operation.

“We are excited to launch our paint stewardship program in Syracuse so that households, businesses and institutions can dispose of leftover paint at their convenience, throughout the year,” said Andrew Radin, manager. of PaintCare’s New York program. “We are grateful for the important role that paint and hardware stores, as well as local government facilities, will play in ensuring the success of this environmental initiative by voluntarily serving as drop-off sites. We look forward to adding more partners in the coming months as we aim to recover and recycle over 1 million gallons of leftover paint each year. »

The organization plans to expand to more than 300 depot locations across New York in the coming months through partnerships with local paint stores and government facilities.

New York’s paint recycling program follows a paint stewardship law that state lawmakers approved in 2019. The law ensures that everyone who produces, sells, and uses paint “work together to minimize, reuse and recycle unwanted paint”.

The New York State Department of Environmental Conservation provides oversight of the program, according to a press release from PaintCare.

PaintCare said it launched programs across the country after similar laws were passed in California, Colorado, Connecticut, the District of Columbia, Maine, Minnesota, Rhode Island, Oregon, Vermont and in Washington.

PaintCare says it “makes it convenient” to recycle leftover paint by establishing drop-off sites at local government facilities and at paint retailers near residential neighborhoods. Interested persons can find the locations by visiting PaintCare’s online site locator at www.paintcare.org, or by calling the PaintCare hotline number at (855) PAINT09.

Most PaintCare locations accept both latex and oil-based architectural paint products, including paints, stains, sealers, and varnishes. The paint must be deposited in its original container with its original manufacturer’s label. A complete list of products accepted by the program is available on the PaintCare website at www.paintcare.org/products.

Businesses and residents don’t have to pay a fee when dropping off their unwanted paint for recycling, PaintCare said. A small fee from the sale of new paint – called the PaintCare Levy – “funds all aspects” of the program, including paint collection, transportation, treatment and public education.

The new program is expected to handle more than 1.1 million gallons of paint in its first year.

In New York, 36.6 million gallons of paint are sold each year, and it’s estimated that about 10% of household paint goes unused. PaintCare says this helps ensure the “highest and best use” of paint collected through the program. Most paint received by PaintCare is latex-based and can be remixed into recycled content paint by processors.

To date, PaintCare claims to have processed more than 50 million gallons of paint nationwide and “saved state and local governments millions of dollars.”

“Paint products can harm the environment if not handled properly,” DEC commissioner Basil Seggos said in the statement. “The New York State Paint Stewardship Program will simplify the process for those looking to dispose of paint by providing a collection network of paint retailers, local government facilities and reuse stores in more than 300 drop-off locations across the state.”