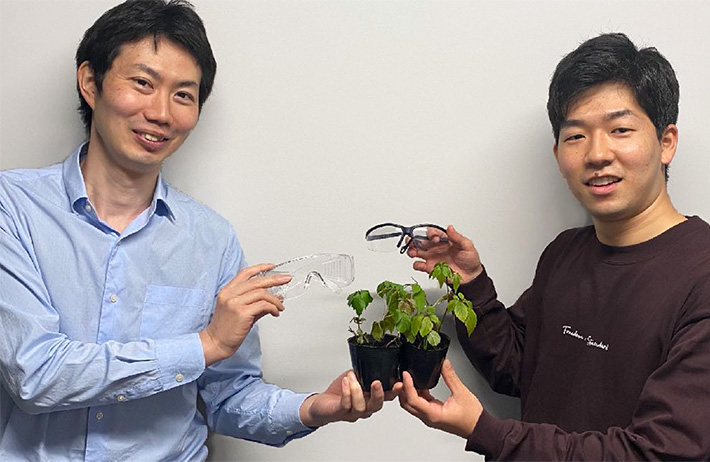 On October 28, the Tokyo Institute of Technology held an online press briefing with Assistant Professor Daisuke Aoki from the Department of Chemical Science and Engineering, School of Chemical Materials and Technology. He discussed his work on a method to convert plastic into fertilizer, a development that could help solve major global problems.

The notion of research

Over 70% of plastic is thrown away; only around 15% is recycled

Plastic is found everywhere in everyday life. Because plastics are inexpensive and lightweight, they are used to make shopping bags, drink bottles, and even vehicle components. Since plastics deform when heated, they can easily be shaped and produced in bulk. They are made of resins, which are polymers containing carbon. By changing the chemical structure and topology of the molecular chain, plastics can be made as flexible or tough as the application requires. For this reason, plastics have helped enrich our lives. 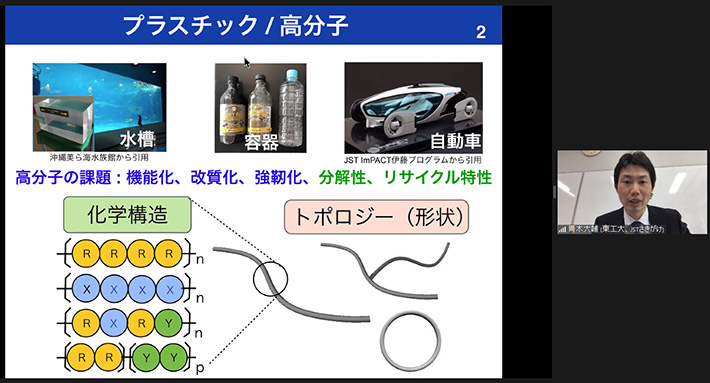 Aoki explaining the uses of plastics and related issues

Research on plastics with new properties is continuing. But recently, the focus has shifted to the degradation and recyclability of materials in addition to the development of new features. Indeed, in general, more than 70% of plastic is thrown away and only about 15% is recycled. There is also the problem of small plastic particles – microplastics – that end up in the oceans. Aoki stressed that the demand for plastics is extremely large and that reducing their disposal and efficient use is an urgent global issue.

Instead of the conventional (in Japan) practice of incinerating discarded plastic, Aoki and his colleagues developed a degradation method that minimizes carbon dioxide emissions and came up with a system to recycle the plastic. The system takes bio-based plastic and degrades it with ammonia, resulting in a product that can be used as a fertilizer. Degradation with ammonia does not require carbon-emitting energy or expensive precious metal catalysts. In addition, the product can be used as a fertilizer without further processing, thus achieving an ideal ecological cycle.

A condition for this system is that the starting material for the plastic must be safe and non-toxic: the plastic must not be of the conventional petroleum-based type, but come from an organic source – biomass. Specifically, the system uses plastic called “poly (isosorbide carbonate)”. Aoki recounted that this was a concept he had nurtured since he applied to the Techno-Renaissance Japan Ideas Competition as a student and was able to publish it as that academic article now, 10 years later, after having successfully completed this demonstration. 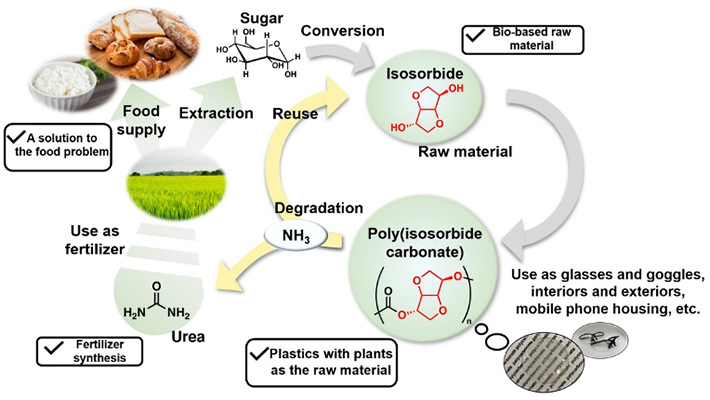 Polycarbonate (a polymer linked by carbonate groups) is a type of plastic and it can be completely degraded by ammonia so that the polymer (several monomers linked by chemical bonds) can be converted into monomers and urea. Therefore, if safe monomers are used to make the polycarbonate, it will degrade into a mixture of safe monomers and urea. So the team used isosorbide (a non-toxic compound synthesized from glucose), which is a biomass resource, as a monomer to make poly (isosorbide carbonate), an isosorbide polymer linked by carbonate groups.

To demonstrate the recycling system, the team reacted the synthesized carbonate with ammonia and studied how it degrades. The cloudy plastic dispersion liquid became a clear liquid. This indicates that the monomers linked by carbonate groups have been separated by ammonia. In other words, degradation had occurred, converting the plastic to monomers and urea. Aoki explained that when the team optimized the reaction conditions for carbonate degradation, they found that degradation using aqueous ammonia heated to 90 ° C was the most efficient.

Changes to a polycarbonate when it is degraded by aqueous ammonia

Point 2: Demonstrate that urea and the isosorbide product work as fertilizers

Urea is one of the most important chemical compounds in the world, said to support half of the world’s population through its use as a fertilizer. The research team used the degraded compounds, including urea, and experimented with their effect on plant growth. They studied the growth of thale watercress (Arabidopsis thaliana) under three conditions (isosorbide only, urea only, and whole degradation product) and found that thale watercress that received the whole degradation product increased the most.

Test on the growth of thale watercress (Arabidopsis thaliana)

Aoki also described the growth of mitsuba (Cryptotaenia japonica), a familiar plant as a vegetable, which was a preliminary result to be considered that was not included in the document.

He concludes: “The Haber-Bosch process produces ammonia, an ingredient in fertilizers, by directly reacting nitrogen and hydrogen in the air. It was touted as a radical invention, described as “making bread out of air”. We want to do more research in order to create a process for “making bread from plastic”. 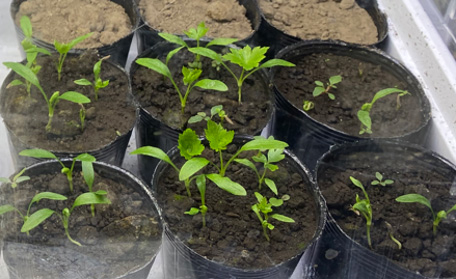 Tests on the growth of mitsuba; the team will study the mechanisms of growth and the types of plants for which their system is adapted

The recycling system we have demonstrated in this study can be applied to bio-based polycarbonates. The volume of this type of plastic among the plastics widely available on the market today is limited. But this concept of using biobased polycarbonate and chemically recycling it into degradation fertilizer instead of incineration allows us to envision a next-generation recycling system that goes beyond carbon neutrality and uses all plastic. by reducing carbon dioxide. We expect it to contribute to the achievement of a ‘carbon-free society’, progress in addressing plastic and food issues, and the achievement of the SDGs. Our wish is to implement this recycling system in society through industry-government-university collaboration. Take plastic and make fertilizer, grow wheat, then bake bread: bake bread with plastic. Maybe one day it will come true.

/ Public distribution. This material from the original organization / authors may be ad hoc in nature, edited for clarity, style and length. The views and opinions expressed are those of the author (s). here.
2021-12-21
Previous Post: Consumer group denounces delay in recycling effort in San Francisco
Next Post: Factories recommit to buying recycled paper cups