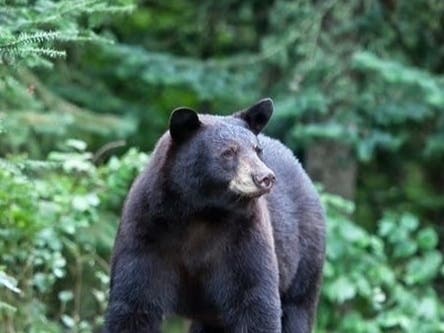 NEW CASTLE, NY – Police are warning neighbors of a sighting of a large black bear in the area and reminding the community that bears belong here too.

In a public notice, police said a large black bear was spotted Friday on the N. County Trail in the Random Farms Dr. area in the town of New Castle. Bear sightings aren’t particularly rare in the area, with about half a dozen sightings reported last summer/fall.

“NYS Environmental Conservation (NYDEC) advises that bears will only be encouraged to leave the area if the bear is creating a public disturbance, acting aggressively toward a human or pet, attempting to enter a home, or is injured and cannot move freely to escape,” police officials said in the public alert. “If a bear creates a problem, New Castle Police will respond and, if necessary, NYDEC.”

According to public safety officials, the best way to keep bears out of a yard is to remove all kinds of food. Even bird feeders should be removed by April 1, according to recommendations from the New York State Department of Environmental Conservation (DEC). Bins should be emptied frequently and kept clean. Compost piles should be moved as far away from homes as possible. Grills with leftover grease can also attract bears, officials have warned.