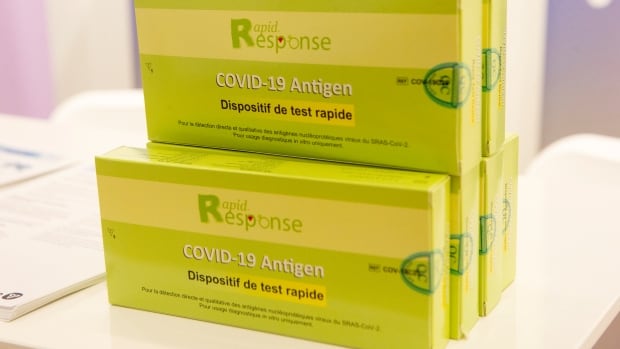 As the province prepares to provide thousands of COVID-19 rapid antigen tests to students returning to school on Monday, an Ontario recycling company is asking people not to put used tests in their bin. recycling, saying they have “serious safety concerns for our employees.”

The warning was issued this week by the Bluewater Recycling Association, a company in partnership with 22 municipalities across much of southwestern Ontario.

The post says the company is “very concerned” about the tests appearing among cardboard and tin cans in the waste stream for recycling.

Company chairman Francis Veilleux said the test kits should be double-wrapped in a plastic bag and placed in the trash, not recycling.

He said the tests used, which include a nasal swab, could pose a hazard to workers handling the waste.

“Just putting it loose in a blue recycling bin is very problematic,” Veilleux said. “You run the risk of exposing all of our staff to it and we already know the virus is highly contagious.”

Veilleux said personal protective equipment, including gloves and masks, has also appeared in the recycling stream since the start of the COVID-19 pandemic. He says they should also be in the trash.

“It should never be in recycling, we have people sorting this material and they could be exposed to COVID-19.”

Each test kit comes in a cardboard box containing a nasal swab.

The instructions provided with the kits only state that the swabs should be disposed of “in accordance with appropriate biohazard waste disposal protocol”.

Jay Stanford leads waste management for the City of London and says swabs in the recycling stream haven’t been a big deal. He recommends that the box of the kits be recycled and that the swabs be wrapped in two plastic bags and thrown in the trash. He said any PPE used, including face masks and gloves, should also go in the trash.

“We tracked that, and there were no concerns about our recycling system or our waste management system,” he said.