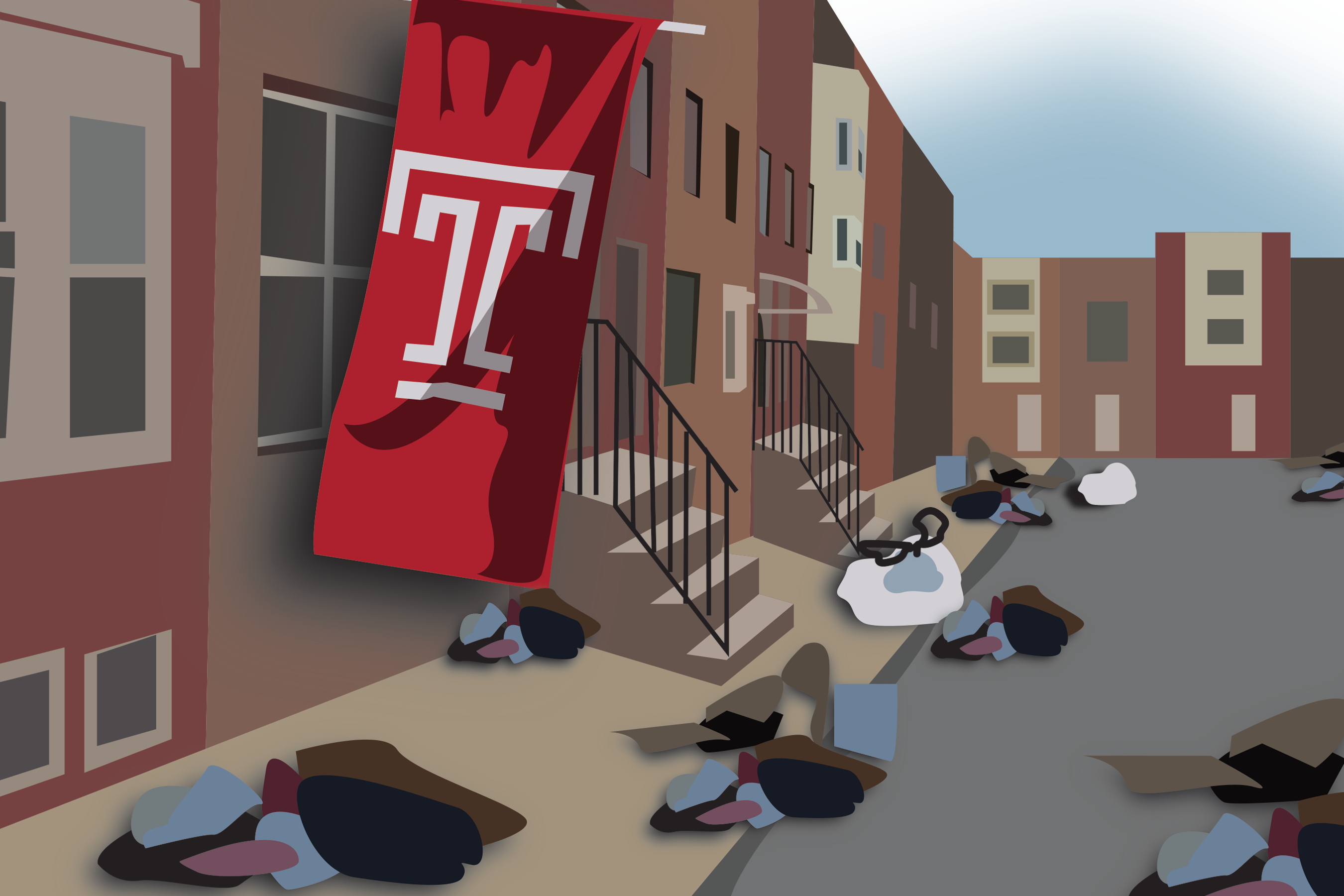 For at least three years, Temple University has placed special dumpsters on streets where students heavily populate off-campus areas to avoid buildups of trash from those leaving off-campus housing.

Although dumpsters help reduce moving waste, they are not a sustainable waste solution near the main campus, as they are only available for short periods during the summer. For years, local residents have suffered environmental injustices from students who leave litter in their neighborhood.

While the Temple campus looks pristine, stepping off campus paints a different picture. Campus waste management includes a comprehensive system for guarding Temple grounds, but off-campus cleaning is left to the Philadelphia Sanitation Department, which is not equipped to handle excessive student waste.

The university has a responsibility to keep North Philadelphia clean as many students live in the area temporarily, but leave a trail of trash and disrespect for their neighbors who reside there permanently. Temple shall coordinate university-wide sustainable waste management with neighborhood residents to evaluate and implement clean-up initiatives and continually instruct students to learn and practice good waste management.

Temple students leave their garbage outside days before Garbage Day each week, resulting in garbage littering the streets. The “temple area” was one of the most polluted areas in Philadelphia, according to the 2019 progress report from firm Zero Waste and Litter, whose funding has since been cut.

“I’ve been cleaning for 20 years, and it’s like it’s getting worse,” said neighborhood resident Judith Robinson, president of the 32nd Democratic Ward Registered Community Organization and director of Susquehanna Clean Up/Pick Up, Inc.

Beyond the dumpsters, Temple’s off-campus waste management efforts include volunteer efforts by students and employees and a partnership with One Day At a Time, a community organization, to clean up the blocks. Temple also worked with Philadelphia to send additional garbage trucks during moving week, said Ken Kaiser, senior vice president and chief operating officer of Temple.

Temple’s Office of Sustainability and other offices run many anti-waste programs, such as Eco Reps, an educational program encouraging sustainable action on campus, but they are not required university-wide.

Temple’s off-campus waste management efforts may be effective in the short term, but waste will linger in neighborhoods until long-term sustainable practices are adopted. Block cleanups only produce temporary improvements before the trash reappears, and the university can only build trust with the community if it has ongoing conversations between local residents and students about waste management.

“There are so many ways that universities can really be agents of positive change, but it really takes strategic thinking, working with schools and community groups,” said Christina Rosan, professor of geography and studies. urban. “There’s a lot of work to improve at Temple, but there’s a lot of confidence building that needs to happen.”

Community members are the most affected by litter and an increase in insects and rodents, so they deserve to have a leading voice on how to improve waste management.

The university should expand its off-campus garbage trucks to pick up trash left by students living in the neighborhood, Robinson said.

“It has to be a comprehensive sanitation program,” Robinson said. “The whole city is a dirty mess, so the students come here, see how mean the city is and how we allow them to do things and they get away with it until someone tells them.”

Students moving to North Philadelphia and littering, unlike they would at home, are an example of environmental racism as they add pollution to a neighborhood of color.

“The idea that you come to a black and brown neighborhood and think littering is okay or being a bad citizen is okay is really about environmental justice and respect for people,” Rosan said.

It is essential to require ongoing conversations with all students about environmental justice that involve learning and practicing the proper disposal of waste. Requiring all students to participate in at least one Office of Sustainability event, such as Stories of Sustainability, each semester as a graduation requirement would educate more students about their off-campus impact.

“A lot of students just think it’s not really their problem,” said Caroline Merrill, an environmental engineering major. “When we move into a community that wasn’t even designed for students to be here in the first place, it’s our responsibility to keep it clean for the people who still live here.”

For now, students can connect with off-campus organizations, like Susquehanna Clean Up/Pick Up, Inc., learn about waste management in Philadelphia, and participate in neighborhood cleanups.

Temple’s temporary solutions for off-campus waste management will allow the waste problem to persist until sustainability, ongoing conversations, and community collaboration are emphasized in its efforts. By developing a strategic “plan of action,” as Robinson suggested, Temple can become a better neighbor.