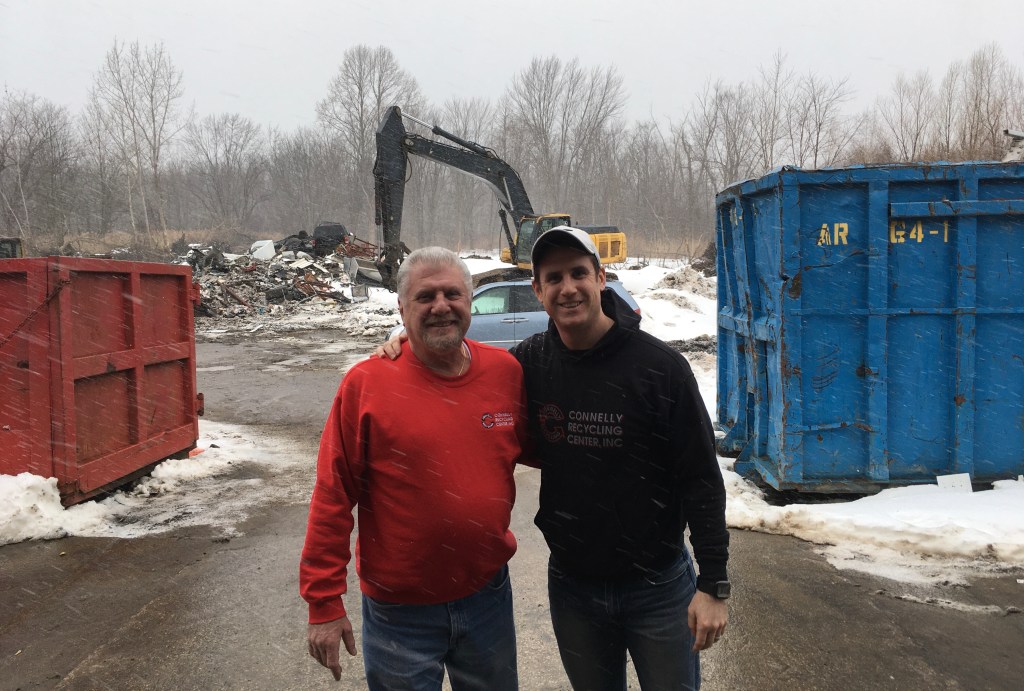 It was around 2010 when Joe Connelly had sold the last of his three salvage and auto parts yards in northeast Ohio and was about to retire.

But his son, Michael Connelly, convinced him to start a new business. Joe agreed to join Michael in pursuing an idea that led to the opening of Connelly Recycling Center at 4119 North Ridge Road in North Perry Village.

“I kind of convinced him to do this, strictly scrap,” Michael said.

Connelly Recycling, a licensed scrap metal dealer in the state of Ohio, buys unwanted vehicles and materials that include steel, copper, brass, aluminum, and stainless steel.

Joe and Michael, co-owners of the Connelly Recycling Center, built the business from the ground up. They had been looking for a place to locate the recycling center and concluded their search in North Perry, where they purchased an undeveloped 6-acre parcel on the north side of North Ridge Road.

“We cleared the land, leveled everything and built the building ourselves, so we were able to customize it the way we wanted,” Michael said.

Site preparation and construction began in 2011 and took about a year, Michael noted.

“So we officially opened in May 2012,” he said. “We’re actually going to celebrate our 10th anniversary.”

But the story of Michael and Joseph working together goes back even further.

Joseph purchased his first salvage and auto parts yard, located in Kirtland, in 1994.

“I had it for about seven years and sold it,” said Joseph, who is also trained as an auto mechanic.

He then purchased a salvage and auto parts yard in Ashtabula and a similar business in Painesville.

Michael worked for his father on and off through college, high school, and university.

Joseph said he noticed that Michael was interested in a specific aspect of these three companies.

“He was never really into auto wrecking, he was into metal recycling,” Joseph recalls.

Today, in his management position at the Connelly Recycling Center, Michael can immerse himself in buying and selling scrap metal.

“When I come to work in the morning, I see where the (commodity) market is,” he said. “And making sure I’m buying at the right rate so that when I go to sell I don’t suffer a loss. Because we work on pretty small margins here. This business is a volume business.

“We also buy a lot of copper and brass, and just a lot of plain aluminum siding,” he said.

When customers arrive at the Connelly Recycling Center in vehicles filled with recyclable materials, they step onto a 60-foot scale to get weighed. The scale is equipped with a dashboard-like panel that displays the vehicle’s weight upon arrival.

“A lot of heists don’t have this (dashboard),” Michael said. “So you kind of follow the honor system with a lot of those yards and you don’t know what your stuff weighs. So that’s kind of the good thing we have about our yard is that you can see what you weigh. So there is no play with the ladders or anything.

Vehicles then proceed to the rear of the property, where Connelly’s shipyard is located. This is also where the staff of the center sorts the food and places it in different containers. Junk cars are also dismantled in this area for recycling.

Products purchased by Connelly Recycling Center are then sold to metal processing companies, who take additional steps to prepare the products for use in new products.

Michael said some people don’t realize that if they bring appliances or other types of junk to a landfill, they have to pay a disposal fee.

“As long as something is metal, you can actually bring it here and get compensated and not have to pay to get rid of it, so that’s a nice benefit,” Michael said. “And what you bring is going to be recycled. It’s good for the environment, it doesn’t go to landfill, and you have a few dollars in your pocket. So it’s sort of a win-win.

Recently, he and Joe cleared an additional 2 acres on the northern part of the Connelly Recycling Center property to expand its steel mill and create more space for drive-thru customers when dropping off scrap metal.

“In the summer we do a pretty big deal,” Michael said. “There are times when we deal with 125 to 150 customers a day and sometimes there are traffic jams. We just want to make sure traffic is flowing and everyone is getting in and out safely. ”

While Joe said he was preparing to make another attempt at retirement, he believes the Connelly Recycling Center is in good hands under Michael’s leadership.

Michael said he was following his father’s advice on how to best achieve long-term success.

“Dad taught me that if you’re fair and honest, it does the trick for you and people come back,” Michael said. “If you can’t do business that way in this industry, you won’t make it.”