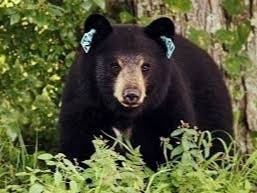 Officials from the Connecticut Department of Energy and Environmental Protection said that during the fall, black bears increase their food intake to add the fat stores needed to help them survive. Winter.

DEEP officials publish several tips on best practices for reducing the likelihood of a bear encounter.

“Black bears should never be fed, whether intentionally or not,” said Jenny Dickso, director of the DEEP Wildlife division. “Bears that are drawn to homes by readily available food lose their fear of humans. It’s important to remember to keep the outside grates clean and the trash secure and inside until collection day to avoid giving bears a tempting snack. Bears who are rewarded with meals spend more time in neighborhoods and near people, increasing the risk to public safety, the likelihood of property damage, and the possibility of bears being struck and killed by vehicles .

“It’s up to all of us to help prevent bears from learning bad behavior.”

Other pointers can be found on DEEP’s Living with Black Bears web page: https://portal.ct.gov/DEEP-Living-with-Black-Bears. DEEP has also created a video incorporating several of these best practices, available here.

The most important step is to eliminate food attractants:

In the rare event that a bear appears to be aggressive towards people, residents should immediately contact DEEP’s 24-hour dispatch line at 860-424-3333, DEEP officials said.

The publicly reported bear sightings provide “valuable” information to help DEEP monitor changes in the black bear population, officials said. Anyone who sees a black bear in Connecticut should report the sighting to https://portal.ct.gov/DEEP/Wildlife/Report-a-Wildlife-Sighting or call the DEEP Wildlife Division at 860-424-3011. Information on the presence or absence of ear tags, including tag color and numbers, is particularly valuable, officials said.

“A common misconception is that a tagged bear is a problem bear, and a bear with two ear tags has been caught on two different occasions for causing trouble. In fact, each bear receives two ear tags. ear (one in each ear) the first time it is handled by DEEP biologists. Most of the bears tagged were not captured as problem bears, but rather as part of a research project on the population of the state, ”DEEP officials said.