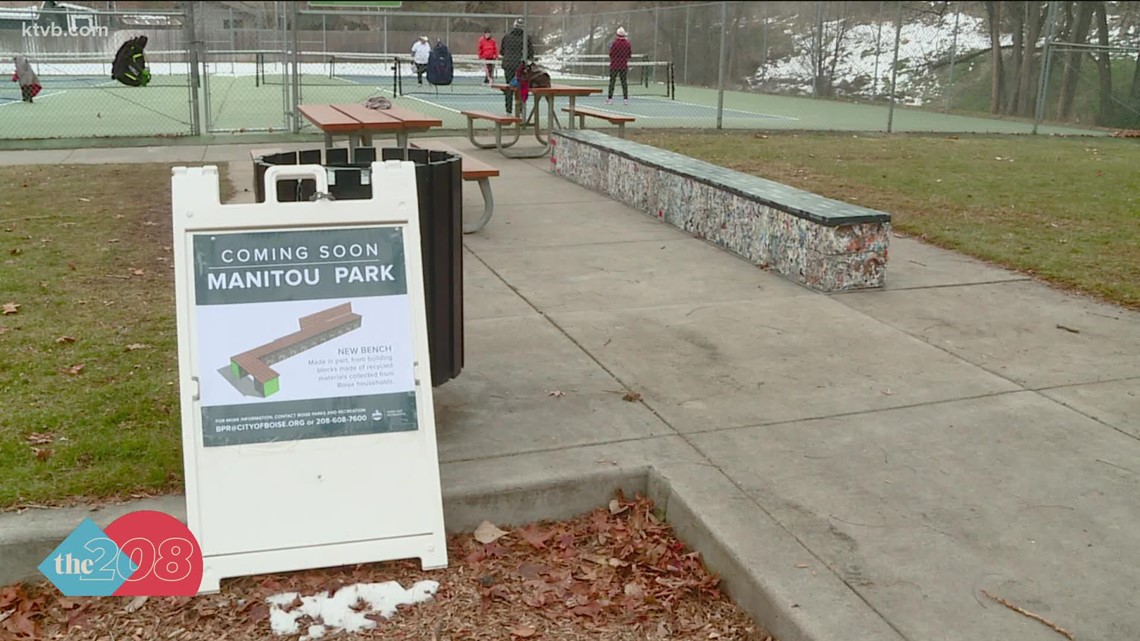 The Manitou Park bench is designed by ByFusion and is half finished. Inside the bench are the contents of the resident’s orange bags.

BOISE, Idaho — The City of Boise has partnered with a Los Angeles recycling company, ByFusion, to create a zero-emissions recycling process.

ByFusion works with the Hefty Energy Bag program by collecting all the plastics inside residents’ orange bags and turning them into plastic blocks.

20% of Boise residents are involved with the city’s bag program, but many wonder where their items go.

“Some things I questioned is what happens to energy bags?” Bill Cowan of Boise said. “Is it just to make people feel good?”

The Hefty Energy Bag program started in Boise in 2018 in response to China’s Green Sword policy in which they stopped taking many recyclable materials from the country.

Currently, Boise sends the entire contents of the orange bags to Renewlogy in Salt Lake City. Renewlogy uses orange bags to create cement to replace coal as an energy source. The process has an impact on the environment.

“I come from the fact that we’re hauling some of this energy bag waste to Salt Lake, it intuitively doesn’t make sense if you think about the 30 tons that’s being hauled,” Cowan said.

The city partnered with ByFusion to create a pilot program, testing the company’s recycled blocks. The Manitou Park bench is designed by ByFusion and is half finished. Inside the bench are the contents of the resident’s orange bags. According to the company, the bench diverts 1,100 pounds of waste from the landfill.

“Trying to find technology that really recycles is always our goal,” said Peter Mccullough of the City of Boise Public Works Environmental Department. that I put in there,” he said.

According to Heidi Kujawa, Founder and CEO of ByFusion, the process of turning waste into blocks creates zero emissions.

“It’s just steam and compression, we don’t sort, we don’t clean, we literally take the plastic waste, throw it in the machine, make a block and stick it in a wall,” said Kujawa. as a waste management infrastructure company capable of meeting the city’s infrastructure demands, which includes everything from parks and recreation to the department of transportation and other major community support services. »

“All of our trash in Treasure Valley, whether it’s from Boise, Garden City, or Eagle, all goes to the same landfill in Ada County, we have a landfill, it’s not going to last forever, it there are varying estimates of how many years left, but it was between 60 and 75 years left, maybe even less,” Mccullough said.

That’s why the city is rushing to find a more efficient way to recycle. If the pilot program is successful and attracts interest from local architects and developers, ByFusion hopes to bring its block-making machine to Boise, so it can recycle locally.

The Manitou Park bench will be completed in early February.

Check out the latest Treasure Valley and Gem State news in our YouTube Playlist: