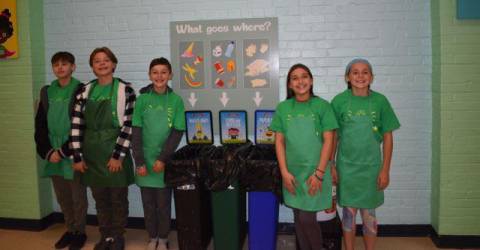 Elaine Makarevich has taught at Stillwater Elementary School for 30 years.

During this time, she worked school-wide teaching children from kindergarten to grade six in enrichment, gifting and talent programs and several years ago she started and saw a school garden come to fruition. His most recent project was leading Cafeteria Connection: a recycling program designed to add recycling bins and reminders to the cafeteria and have older students teach younger students where recyclables go.

“I wrote a grant last year that we received and the project was launched,” Makarevich said. “We are now in our second year and the program is in full swing. We are very fortunate that Mark Maruska of Gravity Design Works has donated several thousand dollars in materials and many hours of his and his team’s time to add the amazing cafeteria murals and signage. .

Program goals include opportunities for students to design recycling bins, layout, signage, peer education, and day-to-day operations, from design to delivery of recyclables to the city’s recycling center. town of Stillwater.

“Without a doubt, the cafeteria connection has had a positive outcome on the students, staff and ultimately the world of Stillwater,” Makarevich said.

Sixth graders teach younger children which bins to put their recyclables in. The current group of sixth graders will rotate throughout the school year, moving to a new group of leaders each term.

The apple does not fall far from the tree because both parents are educators.

“It’s great to show children who don’t know where to put things where they go,” said Meike Koch, another sixth member of the project.

Gravity Design Works, which is based in Newton, was delighted to donate materials and time.

Makarevich said he donated all of the conceptualization and design time involved in this project. This consisted of over 30 hours of design, messaging, and graphics. It also included all the final configuration. For the production work, $3750 was donated and there were no charges for delivery and installation.

“It was an honor to give back to the school that each of my children attended,” Maruska said. “We loved coming up with ideas to help [Makarevich] publicize its recycling program, then bring them to life. It was as important as any other client or project we work on. Perhaps even more important because these young minds are very impressionable. We look forward to the next call from Stillwater School.