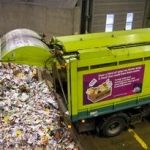 The council is missing a key recycling target, according to a new report.

Less than a third of all waste collected by Brighton and Hove City Council is classified as recycled, reused or composted, according to the report.

But the level of recycling is well below the 35% target, according to the report to the council’s policy and resources committee.

Despite the low recycling rate, only 1.2% of Brighton and Hove’s waste goes to landfill, with most of it instead sent to the Newhaven incinerator, where burnt waste powers 25,000 homes.

A persistent problem is contaminated recycling in communal bins, with pots, trays and plastic bins among the items most commonly disposed of incorrectly. The problem persists even though the municipality has declared that it has sent explanatory leaflets with the municipal tax bills.

The report states: “Recycling rates depend on a number of factors, including that there is currently no large-scale ‘end market‘ to collect low-grade plastics.

“This means that comparison with other local authorities can sometimes be misleading.

“While some collect more material and report a higher recycling rate than the BHCC (Brighton and Hove City Council), these materials can be exported overseas and some of them have been shown to be put in landfill in these countries.”

A feasibility study is underway on the cost of upgrading the ‘materials recovery facility’, at Hollingdean, to accept other recyclable materials, including food waste. Any changes could include allowing the collection of low-grade plastic, aluminum and tetra packaging for recycling.

Actions to improve recycling levels include increasing the number and frequency of communal recycling bin collections and improving signage and color-coded bins.

A textile recycling pilot project took place in Whitehawk last year after research found that people living in public housing threw away the most clothes and other fabrics.

Various events, including a school uniform sale and clothing swap, were held in the area, as well as sewing workshops attended by 90 people at a community event at the Whitehawk Library in April.

Similar events are planned in Brighton and Hove, including a food waste recycling session in Hollingbury.

The Policy and Resources Committee is due to meet at Hove Town Hall at 4pm on Thursday (July 7). The meeting should be broadcast on the board’s website.

2022-07-04
Previous Post: Machinex Partners with Rumpke Waste & Recycling to Build One of the Largest Single-Stream Dedicated Residential Systems in the United States
Next Post: Bears issue statement after 4th of July parade massacre in Highland Park