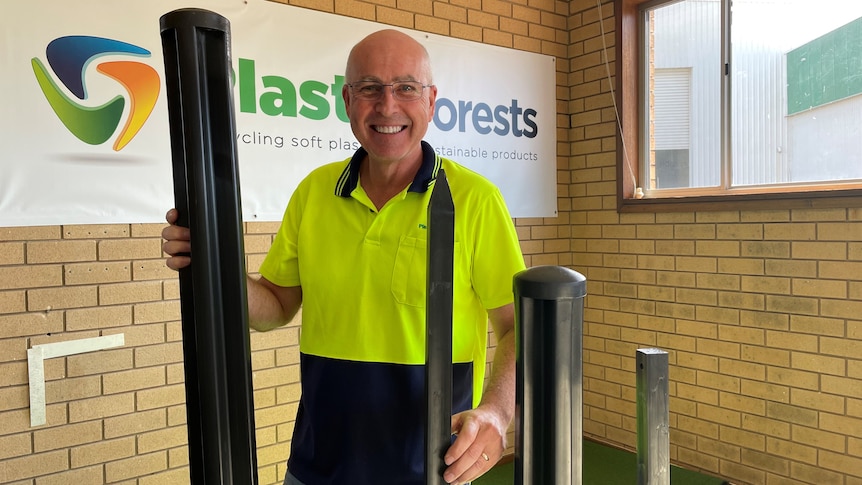 What can you do with the silage film after feeding the cows? Turn it into a fence post.

For the past 14 years, Plastic Forests, a recycling company in southern New South Wales, has taken used silage film and turned it into different products.

“Silage plastic is a great value product if you can work with it,” Mr. Hodge said.

“It goes in all products, but we have a few products that are made entirely from recycled silage film, but most are a mix like our fence posts.

“The poles are fully electrifiable. It doesn’t rust, it doesn’t rot.

“Plastic costs a little more than wooden poles, but they have a lifespan of around 30 to 40 years.”

The company started in Deniliquin, collecting silage films from farmers, and expanded into a warehouse in North Albury where they process plastic and make all of their products.

Their most recent project was to make an underground cable cover for a solar farm in West Wyalong.

“We are also running a recycling program from them,” Hodge said.

“They get 200,000 solar panels and they collect the plastic for us and then we can turn it into something else.

“I think we all have to think about circularity. “

One of the biggest hurdles for the company is collecting silage film from farms across the country.

Right now they depend on the farmers who drop them off.

Mr Hodge said the company is working with Dairy Australia to launch a national stewardship program.

“There are 8,000 tonnes of silage film used per year in Australia and we are one of the few places that takes it,” Hodge said.

“We have so many disappointed people contacting us in Gippsland and North Queensland who would like to use our services, but the infrastructure is just not in place. “

Mr Hodge said they were looking at similar programs already in place in other countries such as Canada, Scotland, Ireland and New Zealand.

“We have more logistical challenges, which is one of the key points for the smooth running of the program.”

Mr Hodges said the stewardship program was still 18 months away from launch.

“The Beast” finds a new home

Tucked away in the back alleys of North Albury is the company’s warehouse which now houses a brand new piece of machinery dubbed “The Beast.”

“Not only do we recycle used plastics, but we’ve also made a habit of buying old machines and bringing them back to life,” Hodge said.

“The Beast was made in America; it is a line of multilayer sheets.

“It was actually used in Melbourne to make Ford’s fuel tanks when we built cars here in Australia.”

Mr Hodge said the company acquired The Beast when its Melbourne owner agreed to sell it to them to stay in Australia.

The machine can produce five to six times more product than the company’s other sheet metal line and will be used to make more underground cable covers as more solar farms are built across the country.

Mr Hodge said The Beast is worth around $ 21 million.

“Exactly the same line manufactures fuel tanks for BMW in Germany,” he said.

“It’s a really great line. When he got to Albury from Melbourne, it took 8 double B’s to bring him in.”

Get the latest rural news

2021-12-26
Previous Post: Pamplin Media Group – Cleveland High senior has its own solutions for homelessness and recycling
Next Post: Is recycling old cars, instead of selling them abroad, better for the planet?