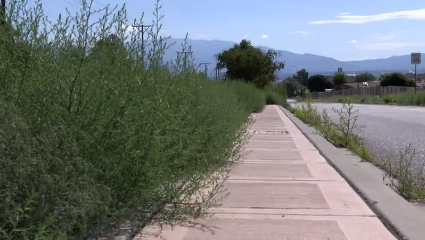 ALBUQUERQUE, NM (KRQE) – Weeds line Tower Road near 98th Street in southwest Albuquerque. ” It is very frustrating. These weeds are already three feet tall, almost four feet,” said Albert Marquez, who lives in the area. Weeds line the sidewalk and cover the median of the tower.

According to the city’s website, homeowners are responsible for weed control all along their property, including to the edge of the sidewalk. The City’s Code Enforcement Division is supposed to enforce these rules by contacting the landlord. Once this initial contact has been established, the owner can be cited if the problem is not resolved.

“Then you have the weed-covered medians. You don’t even see the plants because the weeds are taking over,” Marquez said. According to the city’s website, the city’s solid waste department is responsible for cleaning up weeds on medians.

“I’m just frustrated. Something has to be done. It is not fair. I mean, we pay taxes,” Marquez said.

Earlier this month, people were complaining about invasive weeds covering the “Welcome to Albuquerque” sign along the tower.

Busy Albuquerque intersection could use some improvement

“I noticed these weeds about two months ago and started calling the 311 community contact center,” Marquez said. He said he didn’t get an answer. “It destroys the beautification of Albuquerque. It’s the ‘Land of Enchantment’ and Albuquerque is a beautiful city.”

KRQE contacted the city on Sunday to see why the weeds might be neglected and if there are plans to remove them, but did not hear back Sunday evening.